On Memorial Day on the way back from a great day trip to Mystic, CT for some “lobstah” we played tag with a Fisker Karma with NY plates for many miles. We got to see the front, back, sides of it and its a pretty smart looking car. I like the looks of the front and the sides, but the back isn’t as impressive to me. I had known they had gone bankrupt and they and the defunct battery startup A123 had been bought by some Chinese billionaire but other than that I didn’t know much about the car or the company. So while driving back my wife started started googling and reading the information to me. 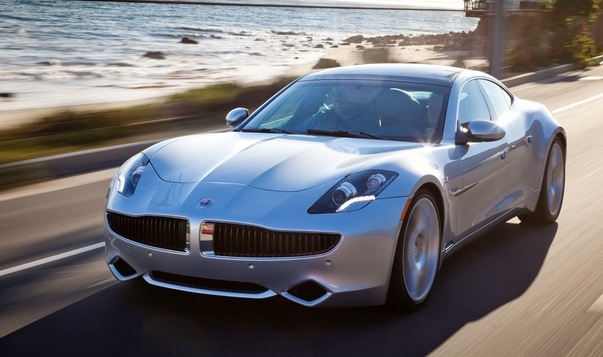 Our first question when we saw the car was if it was an electric vehicle (EV) and the company is bankrupt how did they make it all the way up here from NY? The answer is that while wikipedia calls the Fisker Karma an electric vehicle, it’s really a hybrid. There’s a whole area of research and writing on hybrids that I won’t get into. The interesting part is around terminology. If you run only on electric and use gas just to fuel a generator to get more range you can call the car an EV even though you’re burning gas most of the time. Who are they fooling?

There are two “fill” ports on the car, one for electric and one for gas and we saw them in the standard places on both sides of the car. With gas the Karma gets about 20MPG, and with electric the EPA rates it at a relatively-low 52MPGe. The electric range according to the EPA is a paltry 32 miles (the Model S EPA rating is almost 10x that at 300 miles). Also, unless you’re a a bit nuts you can’t achieve EPA ranges which require driving on perfectly flat roads at 55MPH etc.

With these kinds of specs i’d call the Fisker “barely electric”.

When you combine both the gas and electric portions of the car the full range was 230 miles. So even though you’re burning gas you’re going to have to stop every 100 miles or so to fill up. The Karma is neither a very efficient gas car, nor a particularly good EV.

Like most hybrids, and what ultimately turned me off the hybrid category before I found the Model S, the cargo/interior room is compromised from having to support two entire power systems. On the Fisker this was so pronounced that it got rated as a subcompact by the EPA.

The interior was modern and different but more alone the lines of the evolutions in standard cars rather than the radical departure of the Model S with its huge 17″ screen.

The Fisker had a solar panel on its roof which they claimed could gain up to 4-5 miles of extra range a week (if it was really sunny, all the time). Of course they gave up things like a panoramic sunroof for that benefit and the Tesla forums are full of people doing math showing that adding solar to the roof of a car just doesn’t make sense given the small return you can get. But, when you only have 32 miles of EV range, 4-5 extra miles is a huge percentage improvement. I think the solar roof part was really just a sales gimmick to make people think the car was green.

The Fisker had a sound generator that triggered automatically at speeds less than 25MPH when running in pure EV mode to warn pedestrians of its approach. There are times in the Model S where it would be great to have some button you could trigger to make an obvious-but-not-rude sound. I’ve already been stranded behind slowly walking pedestrians that didn’t know I was following them in my Model S with the only option being a rude horn.

Reports say the Fisker Karma can go from 0-60 in 5.9 seconds putting it in the same performance category as the Tesla Model S 60 and slower than the 85 and P85 versions.

The Karma was also not inexpensive with a starting price around $102K and going up to $116K, putting it in the class of the Porsche Panamera and the Tesla Model S.

Fisker, like Tesla, was a high tech startup company. Fisker, unlike Tesla chose to use another startup’s battery technology to power the vehicle. Tesla chose to put 7,000+ time-proven Panasonic batteries in theirs. I’m a big believer in startup companies not betting their success on the success of another startup. That rarely ever works out well. It should be mentioned that early in the life of Tesla Motors the founder of Fisker actually worked for Tesla and later split off to start Fisker Automative amid lawsuits and controversy.

Both Fisker and Tesla took green-energy loans from the government. Fisker borrowed $529M and never paid it back. Tesla borrowed $465M and repaid it in full. Ahead of schedule.

Fisker started shipping cars to customers in 2011 and got to just south of 2,500 cars before going out of business in 2013. During that time they were plagued with battery problems, reports of car fires and other issues. Tesla has shipped over 40,000 cars so far, admittedly not without their own exciting events along the way.

Both Fisker and A123 have been purchased by a Chinese billionaire who hopes to revive the two companies, but given all the compromises above it seems unlikely that it will go well, but alas, there’s no stock to short there.

The Tesla Model S and the Fisker Karma were both built by high tech startups in California but the companies took very different paths to producing green vehicles. Fisker focussed on design with an award-winning exterior design but joined it with a mediocre powertrain configuration plagued by supplier and design issues and compromises. Tesla focussed on the engineering aspects of the car, using proven technology and making it better while still holding to a clean exterior design.

The Fisker Karma is overly complex. It’s also slower and more expensive than the Model S. It has less range than the Model S, even with a gas-powered generator onboard. It is full of compromises like interior space and is not surprisingly no longer produced. It does, however, have a noise maker and better cup holders.

The Fisker Karma does, however, have a noise maker and better cup holders.

As Toyota has proven, hybrid vehicles can be tremendously successful if done right. The challenge is understanding the mission and staying true to that mission. Toyota set out to improve MPG for the masses by using hybrid technology in reaction to rising gas prices. Fisker set out to make a great looking car and only really thought cleanly on design (aesthetics) but made a lot of compromises in execution. Tesla set out to make a true electric vehicle with no compromises and they are accomplishing that mission. Tesla has yet to reach the mass-market level of their aspirations but they are well on their way and already have a true electric vehicle that makes no compromises.

For what its worth we made the 150 mile round trip to Mystic, CT with 100 miles of range left at the end. While we passed the only Supercharger nearby on the way down and back in Rhode Island, there was no reason to stop and its a lot more convenient to charge at home.

I’ve made no compromises with my Model S.

This article first appeared on Teslarati.