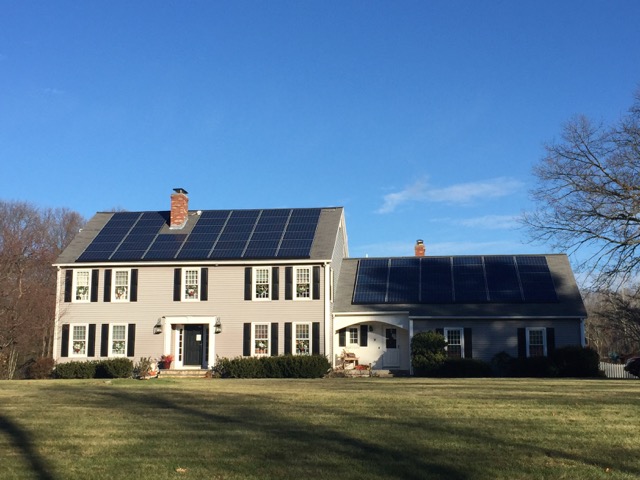 Shortly after placing my order for my Tesla Model S I started looking into solar energy as a way to offset my future increased electric bills. After some research, I ended up going with Solar City and signed up in April 2014.

After a number of scoping, design, and electric company challenges the day finally came for installation.

While I had originally hoped for a much larger system, the system that was installed was still large by most people’s standards. The final design called for 70 panels, each capable of generating 255W for a total of 17.8 kW and an annual expected generation capability of 18,611 kWh.

To put that into perspective, in a given month I use an average of 775 kWh (as measured at the wall) to drive an average of 2,400 miles. That usage will climb a bit for the winter months, but  using those numbers i’ll use about 9,300 kWh in a year for my Model S or only about 50% of my expected generation capacity.

What this means is that i’ll be driving my Model S on 100% solar generated energy and still have solar energy to spare to offset my normal electric costs.

Many installations are half this size or smaller due to a number of constraints. Because of the size of this job, Solar City booked 2 days for the install and sent a crew of about 8 to do the work.

It was a bit nerve wracking having started the project in April to have them schedule the install date for December 8 in New England. We’ve already had our first snow, ice storms and all that and I was wondering if the install would be able to happen at all.

On the scheduled date the team arrived. They were late due to leftover work at a different site, but they turned up despite the 30 degree temperature and wet surfaces and got right to work. It was immediately clear they knew what they were doing and had a system down. 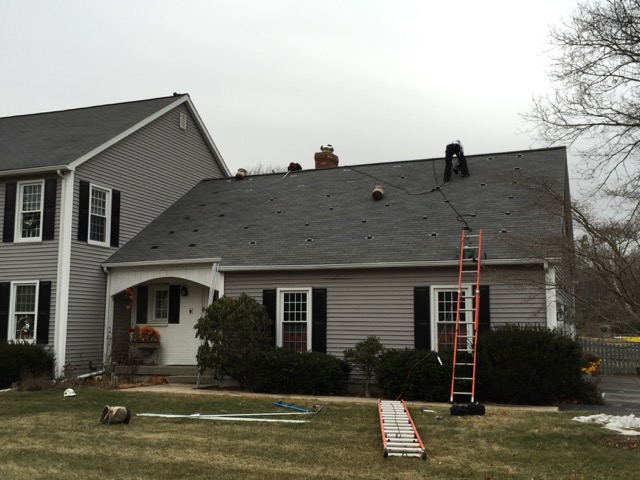 The first order of business was to tape off the area to make sure nobody walked near where they were working as things get dropped off the roof sometimes. Getting hit in the head by one of those battery packs for the cordless screwdrivers would be no fun. Respect the tape!

After the tape, they set anchors in the roof to attach their safety harnesses to and were always hooked up to them as they worked.

After the setup stuff they got to the hard work of setting dozens of anchors for the panel mounts all over the two target roof surfaces. That part took most of the first day.

At the end of the first day they had managed to put panels on the smaller of the 2 roof lines and had most of the anchors ready on the larger roof line.

After drilling and banging on my roof all day Monday and putting all the mounting brackets in we were hit with a Noreaster on Tuesday and they had to cancel for the day.

It rained buckets all day long Tuesday and then iced everything over at the end of the day to top it off. Near the end of the day I crawled into both attics and inspected the entire roof. If it was dry after that it would survive anything. It was totally dry. Solar City guarantees no leaks but they also have a system for making sure they don’t cause roof issues and it was good to see it worked for me!

On the third day they returned despite the rain and proceeded to work a full day in cold weather and light rain.

During the install there were two different design issues that came up. The first was that the designers back at corporate had them putting 70 panels on the roof, but one would not fit behind the chimney. They offered to stick it somewhere else, but we declined as it would have been asymmetrical anywhere else and the aesthetics would not have been good. So we ended up with a total of 69 panels and a slight decrease in target generation capacity.

The second issue we noticed when they started on the third day. While the entire install was on the front of the house only (thanks to National Grid), they had a pipe running in the middle of the roof on the rear of the house which looked stupid and unnecessary.

I spoke to them about it and they cheerfully redesigned and relocated the entire pipe. In the rain. In 30 degree weather. On top of the house.

The install team took our concerns seriously and took care of the problem.

After lugging the panels up all day (each panel weighs about 45 pounds) and mounting them they spent quite a bit of time leveling them so they were all completely flat.

At one point a single panel in the middle of the lot was a bit out of place (not perfect) so one of the guys had to slide down the wet, cold, glass on his knees (getting soaked in the process), 30 feet above ground with just a line to keep him safe just to adjust the angle slightly. Those installers are hard core! 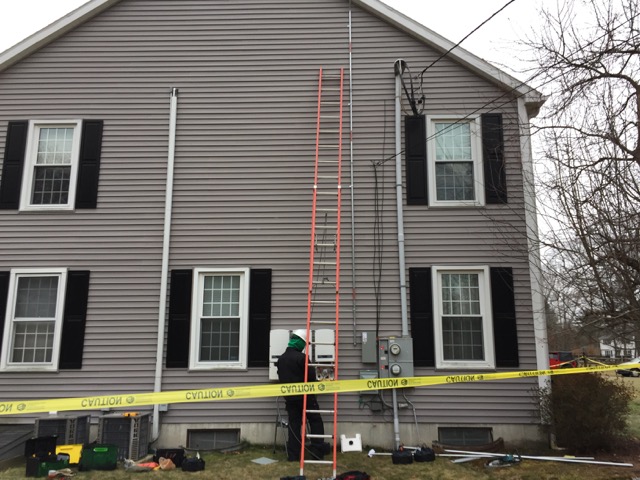 I was surprised that Solar City needed no access to the house (other than bathroom breaks) to do the job. The entire connection for my house was on the outside. They did need a total power cut off of about 45 minutes to connect into the mains but otherwise there was very little disruption.

For my size install they had to put 3 inverters on the side of the house but I had plenty of space to accommodate them.

The process leading up to the install was frustrating and error-prone between the reluctant power company and the mistakes made by the out-of-touch engineers back at Solar City corporate. But the install team was first class. They knew their stuff, were very safety conscious and worked in some grueling conditions and got the job done and done well. They restored my confidence in the decision i’d made and i’m confident again that things are going to work out well.

Now that the system is installed and ready to go we need to have the inspections done. Solar City coordinates it all, but there’s a building inspection, an electrical inspection and then an inspection by the power company. Once all pass (in about 3-4 weeks) we’re given the green light to flip the switches and start putting that free energy from the sun to good use.