With the huge waiting list for the Model 3 and reportedly higher margins on the Model S, Tesla continues to anti-sell the Model 3 and advertises the Model S as the premium vehicle in their line up. Elon recommends that the Model 3 only be considered for budget or space limitations.

Many Model 3 reservation holders are getting calls or emails from Tesla encouraging us to upgrade to the Model S (custom, inventory or used) as they claim it’s a better car and available now. I got that call recently and explained that the Model 3 is likely a better car than what I have now and is a good deal less expensive than the Model S. 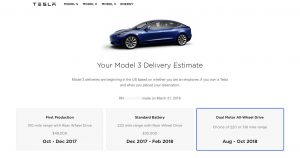 Is the Model 3 better than an older Model S?

It’s arguably true that a new Model S better than the Model 3 in almost every way, but for those of us who already own an older Model S, is the Model 3 better than what we have today? In the sections below I’m going to look at my April 2014 Model S vs the Model 3 and compare these differences.

Newer Model S’s have other advantages such as faster 0-60 times, longer range, air suspension, front consoles, and a number of other things. My Model S lacks all of those features.

The Model 3 is 3.5 years newer than my Model S, and will probably be 4.5 years newer by the time I can get my hands on what I want. Here’s the list of things it will have that my Model S doesn’t, assuming the feature set of the current loaded long-range Model 3 and AWD to be available sometime next year:

There are also a few items that I suspect will be better in the 3 than my S:

I’ve been intentionally comparing the Model 3 to my own well-equipped Model S. The newer Model S’s have many (but not all) of the features listed above for the Model 3.

In the 3, I will definitely miss the extra cargo room and the hatch opening. I’ll also miss that wonderful dash display. And, while I’ll need to pay for Supercharging, I’ll at least I’ll still be able to use them on my road trips.

Is the Model 3 a better car than my Model S? Time will tell, but it sure has a LOT of things that I’d like to have that my Model S does not.